IRONS IN THE FIRE 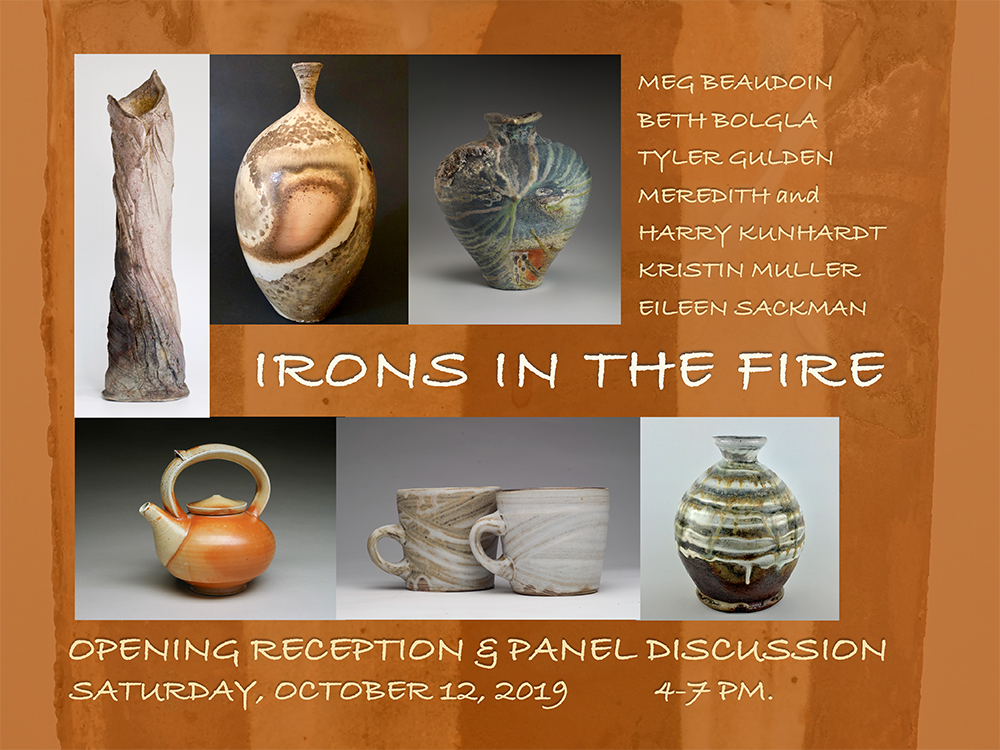 Having received their basic training in ceramics while at Skidmore College, Meredith and Harry are a largely self-taught pottery duo who have worked over the past 4 years to establish a pottery in the Catskill Mountains of New York. Their interest in the history and geology of the region has lead them to explore the potential of local clay, stone, and wood ash as the basic materials from which their pots can be made. In February 2017 Meredith and Harry established 28A Clay, a pottery studio based in West Shokan, NY where they fire a wood burning kiln.

I have just returned to Brooklyn from a summer spent working and living in a small village just outside of La Borne, France, itself a small town and mecca for serious potters from around the globe.  La Borne is known for its outstanding gres (stoneware clay) along the Loire River and is surrounded by dense forests that have long supported a very large and significant ceramics wood firing “industry”.  When I was in school studying for an MFA in Ceramics in Georgia, where I spent my first 35 years prior to moving to NYC, students in the ceramic arts were taught to look to and almost revere the East, Japan, China, and Korea, for all that was masterful and important in ceramics.  I was never taught anything about an equally important tradition of ceramics in Europe, and particularly in this area of France.

Eileen Sackman is a ceramic artist who currently lives in New York’s Hudson Valley. In 2010 she received her MFA in Ceramics from the State University of New Paltz. Eileen began a serious study of ceramics and sculpture in 2001. Her passion for creating and working in the ceramic medium is met by her devotion to teaching through workshops, and in the university and college settings.

Prior to receiving her MFA, Eileen studied Sculpture and Ceramics at Adelphi University and was awarded a MA in Studio Art in 2008.

Kristin Müller specializes in wood fired ceramics and maintains a studio with an Anagama hybrid kiln in Dingmans Ferry, Pennsylvania. She is the Executive Director of Peters Valley School of Craft, earned a Masters of Fine Arts in Ceramics from Hood College. Prior to her tenure at Peters Valley she taught ceramics, was Education Director of Brookfield Craft Center, and began writing. Kristin is the author of “The Potter’s Studio Handbook: A Guide to Hand Built and Wheel-Thrown Ceramics” published November 2007 and is co-author of “Making Good an Inspirational Guide to Being an Artist Craftsman” published April 2017 by Schiffer Books. Kristin exhibits her work internationally and is Adjunct Faculty at Hood College. For more information visit www.kristinmuller.com and www.petersvalley.org

My work is inspired by the natural world and the human body. It aims to reflect the color, depth, and perfect imperfection of natural forms. As with natural forms, imperfection is not a shortcoming but a source of beauty;  the irregularity of the bark of the tree or of its trunk as it adapts in its growth around boulders, the light and shadows within the wrinkles of the face and hands or the folds of flesh in the torso. It is such beauty that the work strives to make manifest.  And as with natural forms where surface and shape unite, where there is no actual duality to mind and body, the successful ceramic work is the result of a union of form and surface where one is actualized by the presence of the other.  The surface is only itself insofar as the form inhabits it and the form exists only as the surface meets the air that surrounds it.

My work is both wheel thrown and hand built from stoneware clays. It is wood fired in anagama style wood kilns for from 3 to 7 days. The work aims to be both functional and sculptural, useful and beautiful. I conceive of it as beautiful because it is useful, and useful because it is beautiful and believe that ceramics is art made an active part of life. From this perspective there is no essential difference between ceramic art and functional pottery. As a ceramicist I use earth in the form of clay, water in order to shape the clay, fire to turn the clay into stone and so contain air inside of the new form that is created. The new form is a result of a confluence of the basic elements of nature with the hands, mind, and heart of the maker.

I do not conceive of my work as an act of self expression but rather as an act of world expression. Making, firing, touching and beholding connects me to the world and so forms a bridge between inside and outside.  Similarly, the work itself creates a new relationship between inside and outside. The world is re-presented in the work and as a result it is re-discoverable in direct connection to ourselves.

Tyler Gulden received a BFA from Alfred University and a MFA from University of Massachusetts Dartmouth and has been a studio potter for over 25 years.

His pursuits in ceramics have included production pottery experience, residencies at Peters Valley Craft Center and Genessee Pottery, and positions as a studio technician at UMass Dartmouth and studio assistant to Chris Gustin. A passionate advocate for the crafts, Tyler has shared his knowledge and passion as a maker during twelve years as an administrator at Watershed Center for the Ceramic Arts, through many workshops and teaching positions, as well as in his current role as a member artist and President of the Maine Crafts Association.

In 1971, while still in high school, I first embraced clay. As I wandered the halls searching for the stone carving room, I stumbled upon the clay studio. Looking back at it now, this was and is the only time that I have ever been grateful for my lack of directional skills. I observed the students at their wheels, and the hand builders shaping expression into developing forms. I was enamored. From this moment on I knew that clay was my passion. The potter’s wheel is my primary tool. It allows me to create a canvas for embellishment while also challenging the physical boundaries of the medium. Wavering rims, darted forms, and paddled surfaces help me discover which direction a piece will go. As the seasons change so does my work. The quiet hint of spring calls me to pursue garden sculptures and the autumns abundant harvest lead me to wrap my arms around large platters. Although the seasons may influence and change the world around me, my quest will always remain the same; to stay engaged in a life long exploration with such a beautiful and challenging material on this lifelong journey.